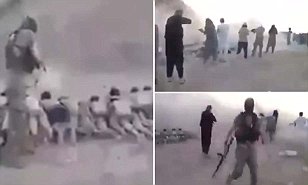 A horrific ISIS video which purportedly shows  200 Syrian children being lined up and gunned by militants has been revealed to be a jihadi propaganda video from 2014.
The sickening mass execution video was posted online by an anti-ISIS activist based in Yemen and quickly started to draw condemnation from social media users shocked by the atrocities.
However the footage is believed to have filmed in late August 2014 and the victims are prisoners of war who were caught by ISIS after the jihadi group overran the Assad held Tabqa airbase in Syria.
WARNING GRAPHIC CONTENT

Loaded: 0%
Progress: 0%
00:00
Play
Mute
Current Time0:00
/
Duration Time0:34
Fullscreen
Forced to lie side-by-side and with their faces in the dirt, the video shows about 200 Assad regime soldiers fighting in the Syrian Arab Army stretched out in a long line to the left and right.

Behind them, at least a dozen gunmen armed with assault rifles and handguns stand poised and ready to fire.
One militant then begins firing at point blank range - shooting each child individually as he makes along the row of children.
Others beside him also open fire, mostly using their machine guns, and the area is filled with dust, obscuring much of the bloodshed.
The video is believed to have been filmed somewhere inside Syria, where ISIS control a swathe of territory, including Raqqa, the capital of the terrorists' self-proclaimed caliphate.
While ISIS is notorious for mass executions, there have been few reports of the militants targeting such a large group of children exclusively.
Although it lasts less than 30 seconds, almost all of the video is too graphic to broadcast unedited. It was not clear what the children were accused of in order to be sentenced to death.

The sound has also been redacted, though clear sustained gunfire is heard throughout the original recording.
ISIS is known to have executed children previously. In one instance, 1,700 Iraqi military cadets were slaughtered in a mass killing that lasted an entire day and night.
Grisly footage of the killings - likely to rank among the group's worst atrocities - showed executions on an industrial scale.
Young men were filmed falling from trucks and pleading for their lives before being lay down in shallow graves and sprayed with bullets.
Others were shot individually and their bodies dumped into the Tigris River, while an excavator was required to shift vast piles of bodies as the executions continued into the night.
In addition to the mass killings, the terrorists have also attempted to invent new ways in which to murder people.
Public beheadings, dismemberment, and throwing people from tall buildings are a common occurrence within ISIS territory.
Other killings are held in areas of significance. After the jihadis overran the ancient city of Palmyra, Syria, in May, they killed dozens inside its ancient Roman amphitheatre.


And the massacre of 1,700 military cadets in Iraq last year was carried out in part in Saddam Hussein's former presidential quarters in Tikrit.

Check out Actress Halima Abubakar photo she put on her IG

Nollywood actress Halima Abubakar posted this photo on her IG page…she looks so different…what do you think?
Posted by Chitoo's diary at 19:14:00 No comments:

Tricia Ikponmwonba, teen Coach and Brand Strategist Project Lead StayInSchoolng Initiative, got married to the love of her life, Yuyu Yusuf in an unconventional beach wedding on Saturday (November 8).

The beautiful couple exchanged the marital vows at the Eleko beach, Chaka resort, Lagos in the presence of friends and family members all dressed in white!
The bridal train however settled for the orange color.

The colorful, beautiful yet simple event started at 12 pm with a church wedding (they were joined together by a Pastor) while, the reception started at 3pm.

The beautiful bride takes selfies with her friends.

Bride’s Parents at the wedding reception:

Cutting of the cake:

A few photos from the traditional wedding of the couple:

We wish Mr and Mrs Yusuf a happy married life!