Hi guys am back again with very entertaining and interesting storyline.

After private attempts by Bobbi Kristina’s boyfriend Nick Gordon to visit her in hospital have been stonewalled by Bobby Brown and the Houston family, he has taken the desperate step of issuing a public plea through his lawyer. In a statement released on Wednesday, Gordon’s lawyer Randall Kessler said his client ‘desperately wants to be with the one he loves.’Gordon's efforts to see Bobbi Kristina have been blocked by the family claims Kessler, with relatives of Bobby Brown threatening to lay ‘hands on him’ if he shows up. Kessler said: “Nick has been trying, privately, to do everything he can to see Bobbi Kristina cooperatively. He has respected the family’s wishes and for that reason alone has not returned to the hospital and risked a public confrontation… He continues to hope that his request will be granted.' Gordon reportedly made an attempt to visit his girlfriend after she had been first hospitalized earlier this month, but instead he got into a physical confrontation with her relatives.  He sent a defiant message to Bobby Brown and the Houston family just days ago when he had the ailing heiress's name tattooed across his arm in huge letters. He posted the picture on his Facebook page after being refused to see her by her family.


Do you its fair on his part ? 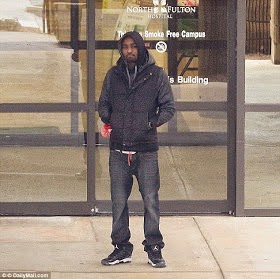