NEWS NEWS CHECK THIS OUT : BUHARI AND JEGA PLANNED TO RIG THIS ELECTION.

Check this out :see  How Buhari And Jega Planned To Rig This 2015 Election.

TalkEntertainmentThe Buzz CentralReplyFollowEmail topic[1] 2 3Topic: CheckOut How Buhari And Jega Planned To Rig This 2015 Election.
The tactful extension of the date for this coming election was crucial to avert an elaborate and dubious plans of Buhari, APC and Jega collaboration to disenfranchise the electorates by rigging.
After the council of state meeting which ended without members reaching an agreement on the possible extension of the election date, INEC was asked to seek advice and consult with stake holders, especially the military who will be tasked with providing security on the election date.


The result of these consultations was obvious because, the stake holders made it clear that they were not ready for the election yet.


They said, should INEC decides to go ahead with the election without waiting for a conducive time then, the consequences will be on their head alone. Hence the postponement of the election date of which APC is not happy because of how it will disrupt their evil plans to massively rig the election.Meanwhile, Jega and Buhari have carefully developed and commenced their rigging plans even before the election happened.

They have developed more than 7 core strategies to use to ensure that the outcome of this election goes their way. Here are some of their plans.1) Buhari and Jega in collaboration with some INEC officials and APC members of Hausa/Fulani Muslims origin in the north have successfully registered THOUSANDS of their people from the neighbouring countries. There are over 100,000 registered voters who are not Nigerian citizens, these people were registered in their native countries of NIGER, CHAD and CAMEROON. It is a fact that Jega and Buhari are well aware and approved of many illegal registration centres situated outside the territories of Nigeria.

Their sole intention is to use this FAKE registered voters to increase Buhari’s votes and chances of winning. This strategy has been used many times in the past by the same group in both census and elections in that regions. Buhari and Jega are guilty of these crimes and they are fully aware that what they are doing is against Nigerian and International law. In fact, the most annoying part of the whole issue is that they ensured that these non-Nigerians received their PVC even before Nigerian citizens started collecting theirs.2) Buhari and Jega also worked together to ensure that more illegal voters were registered in the Northern Muslim populated areas of Nigeria. Children as young as 4 years old have been seen parading their PVC in those areas. From the report gathered by witnesses, all the Alimagirins and every child of school age in most of the Northern Muslims populated areas have been registered and also given their PVC. There are estimated over 3 million under aged voters registered to vote in those areas with a few thousands registered across the border in Chad, Niger and Cameroon. Jega is aware of this and specifically instructed his men to go ahead with the plan.


Do you believe this guys, leave a message. 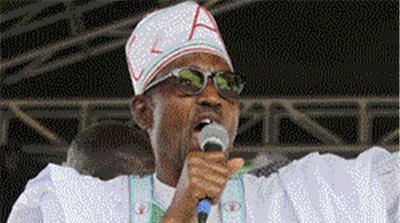