Hello and welcome to Chitoo's Diary.

The bar, 13-year-old bar attendant, Ezekiel Emmanuel, who was allegedly set ablaze by his boss for stealing N1,500 in the Akoka, Ibafo area of Ogun State, has died in the hospital.I told you about the young boy three days ago HERE. The Ogun State Police Command was searching for the bar manager, Mr. Bidemi Shittu, who allegedly poured petrol on the teenager on Monday, February 9, and set him on fire. Emmanuel, it was reported, had been rescued from the fire by residents and rushed to a private hospital in the area, from where he was referred to the Lagos State University Teaching Hospital the following day.It was also reported that Shittu, who is manager of Golden Fingers bar, Akoka, Ibafo, had gone into hiding after the incident.PUNCH, however, learnt on Sunday that Emmanuel died in LASUTH. The teenager reportedly died on Sunday morning.Speaking with PUNCH Metro, Emmanuel’s uncle, Mr. Toyin Olayemi, said the family members, who had not been allowed to see the boy in the hospital, were told by the police on Sunday that Emmanuel had died. He said: “The Ibafo Divisional Police Officer called me on the phone on Sunday that the family should come to the station. It was there that we were told the shocking news of Emmanuel’s demise. He died on Sunday morning. He did not survive the burns. On Saturday, his father and I were at the hospital. The doctors and nurses initially prevented us from seeing him, but when the father wanted to make trouble, they let him in for a few minutes. Emmanuel’s condition was critical. He was burned from the head to the abdomen. Unfortunately, the suspect’s father, Pa Shittu, whose wife was with Emmanuel man Should continue running cause the boys blood is on his head. 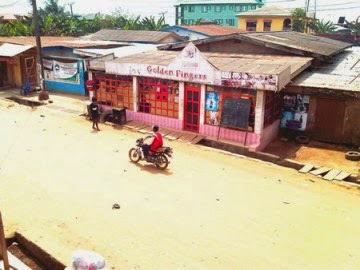