Her Unclad body turned me onA first look at Abdulateef (surname withheld) would give the impression of a young innocent boy who would not hurt a fly.


Ordinarily, the fragile-looking 16-year-old SSS1 student looked odd to be a suspect undergoing interrogation at the anti-robbery section of the Department of Criminal Investigation, Ogun State Police Command.

But the allegations against him are so weighty.Crime Reports gathered that Abdulateef was arrested on January 18, 2015 at Lambe area of Ajuwon, Ogun State after he allegedly entered the residence of a 52-year-old neighbour in the dead of the night, dispossessed her of the sum of N16,500 and went ahead To Molest her, not minding the age difference between them.

The neighbour (names withheld), whose husband works as a civil servant in a South West state, was said to be sleeping in her room when Abdulateef entered her residence at about 1.40a.m.

The suspect met the woman spread on her bed, Unclad. Holding a rod that he had as a weapon, he was reported to have tapped the elderly woman awake, demanding for valuables.

The invader was said to have sent shivers down the spine of the woman by telling her that other gang members were outside, and it would be in her own interest if she cooperated, or she would be dealt with.

The woman quickly handed over the N16,500 she had with her and prayed inwardly that the boy would leave her alone.

But she was shocked when the intruder commanded that she lay on her bed and spread her legs for him, as he wanted to have a good time with her. Conscious of the threat of other members laying siege, the elderly woman quickly complied and the boy had his way.

After satisfying himself, the boy went out, happy with a mission accomplished and the fact that his elderly neighbour did not see his face. But unknown to him, the woman recognized him as his neighbour’s teenage son, though it was dark.


At day break, she put a call through to her husband to inform him of her experience. The husband was reported to have travelled down to his community and went to Ajuwon police station to report a case of robbery and rape.

When interrogated, the teenager confessed his deeds and was promptly transferred to the Department of Criminal Investigation, Eleweran, Abeokuta, for further interrogation.


Speaking with Crime Reports, Abdulateef blamed ‘evil spirit’ for his crime. In his explanation, he said: “I am in SSS 1 at a high school in Ogun State. I live at Lambe area, Ajuwon with my parents. I am the first born and I have three younger ones.

On January 18, 2015, at about 1a.m., I went to my neighbour’s house to rob and rape. I never knew she recognised me. I have never carried out robbery before that day. I don’t know made me do it but I believe I was propelled by an evil spirit.

”When asked how he gained entry into the victim’s house, Asamu narrated his escapade thus: “I entered through the main door which was usually not locked. The residence was uncompleted. I met the woman sleeping. She was Unclad as she slept and the sight aroused me.


I woke her up and asked her to bring all the money she had. I was holding a rod and I told her that my other gang members were outside, threatening her to cooperate or she would be dealt with.

“She handed over N16,500 to me, after which I ordered to lie on the bed. I climbed her and had sex with her.

After about five minutes, I stood up and left for my house”.The suspect said he started having sexual intercourse in 2014 with a girl who was his age and lived in the neighbourhood. But he said the girl’s family had moved out of the community.


Speaking on the events that followed his action, the teenager said “on the third day, the woman’s husband called me and warned me not to pass through his compound again as he wanted to sprinkle charms around his compound. I later saw policemen who were brought to arrest me.

“I confessed to my parents. I used N5,000 to buy a phone but it was not good so I returned it.


I used the remaining to eat and entertain friends.The story was confirmed by the Police Public Relations Officer, Olumuyiwa Adejobi, who said that the suspect would be charged to court when judicial workers resume from their strike action. 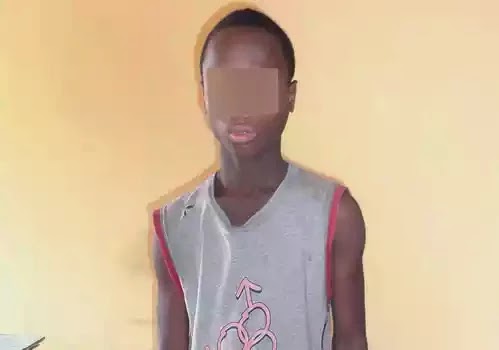