BEAUTIFUL ACTRESS FINALLY REVEALS THE FATHER OF HER TWIN BABIES ....


Actress Nadia had a fiance who is currently with her in Atlanta and he is the father of the twins. 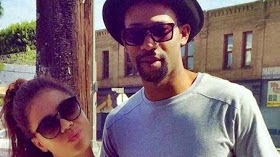 Nadia Buari's father confirmed that the actress had given birth to twins, but everybody wanted to know if Jim Iyke who was known to be dating the actress was the father.

Reports surfacing from Ghanaspy seem to disprove the Jim Iyke theory insisting that the two love birds had broken up soon after Jim proposed to Nadia last year on one of the episode’s  of the actor’s reality TV show, Jim Iyke Unscripted and that he was not the father of the twins.

According to the reports, Nadia had a fiance who is currently with her in Atlanta and he is the father of the twins.

The beautiful Actress after breaking up with Jim Iyke posted a photo of herself with a new guy who was believed to be her new boyfriend on Instagram and Nadia never denied rumors of her dating the dude who stays in America.Nadia gave birth in America.

Could this American guy in the picture be the father of the actress’s twins?