TRUE OR FALSE : DID JONATHAN DISTRIBUTE DOLLARS TO 25 BLOGGERS IN LAGOS 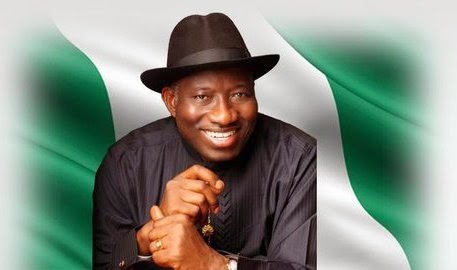 President Goodluck Jonathan said he was hosting 'Nigerian youths' in Lagos over the weekend at the Eko Hotel Hotel & Suites.

Anyone reading this should know that I believe in the principle of supporting the individual, not the party.

I had been a big fan of GEJ that despite so much being said about the corrupt nature of his administration and the news spreading everywhere that he's been busy buying everybody deemed important to his winning the 2015 election, I still saw him as an innocent man who has been widely misrepresented.

However, If these allegations that the President and his handlers have compromised and corrupted more and more people during this election period is anything to go by, then they might have already initiated some Nigerian bloggers into that cult!


First, talking about the so called meeting with Nigerian youths, it beats my imagination how politicians(APC,PDP, APGA, whatever!) would just rally round a few youths and paint a picture that they represent the entire millions of Nigerian youths populace.

It's only your good youth-oriented initiatives that can have far reaching effects on almost every Nigerian youths, if not at all.The last time I checked, the biggest hall inside Eko hotel can only accommodate five thousand heads.

One of the shocking news filtering out after the Sunday, March 1st event was how a barrage of youths were complaining of not being paid because they came late to the event. So, I asked one of my colleagues who went to report; 'is it that the rest of the youths were paid to attend the event in order to see Mr. President address them?"

But that's a topic for another day.The annoying information I'm being inundated with is that the bloggers I earlier mentioned (about 25 of them) specially invited to the event were allegedly given N50K(Fifty Thousand Naira) after the event.


This was in addition to the N200K(Two Hundred Thousand Naira) allegedly doled out to this same set of bloggers in American Dollars at an earlier secret meeting and lunch with the President at the State House, in Marina Lagos.

At the state house meeting, according to one of the bloggers who attended; here is how President Jonathan was said to have addressed these 25 bloggers which he described as the 'key social media publishers and editors' while having lunch with them;"Where is Doyin (Okupe) and Reuben (Abati) ,they both stood up..I wish to apologize to you all (the bloggers), because we as a government have not spent a dime on social media. Please don't blame Abati and Doyin if you have not been getting the type of supports that you need.


I have come to realise the important role the social media play in information dissemination..Minutes after we must have spoken now, most people in UK, US and across the globe will be reading about this meeting..You, more than anything else plays a more bigger role than all the other conventional media .Your followership is huge especially among the youths who constitutes over 65 percent of our population. Let me assure you that our dealings with the social media practitioners will change in my next term..I'll work with you."


As at the time of publishing this opinion, all SMS and calls put through to the Presidential spokesman, Reuben Abati's number was not replied.Politics is a dirty game and I so hate opposition being vindicated, but I hope this allegations are not true, otherwise Lagos state governor, Babatunde Fashola's might be vindicated over his recent accusation that the President is desperate, saying; "he(GEJ) was here(Lagos) for 5 days meeting with different people and groups, distributing money in dollars."

Now, not a few colleagues are already discussing everything that went down. But because even though I'm a blogger, I'm still practicing in the conventional media, which according to GEJ, his '25 chosen and anointed bloggers' are now more important than, let me protect their names and I'm not even allowed to reveal my source as I was trained in journalism school.

But you can be sure this development is already brewing some disappointment reactions in some quarters of the media especially from those who swear they are in the know about these baptism of corruption allegedly carried out by the President and his handlers on the bloggers.

A colleague with an evening newspaper, who also claim to have privy information on happenings during the meeting shares his reaction;"About 25 of them (bloggers) met with our daddy.

I heard before they left State House, our ATM daddy dispensed American quid to all of my friends who were opportune to share lunch with him. My fear: more and more people are being corrupted and compromised!"

Another print journalist and blogger states; "25 people out of millions of them? They didn't even form a quorum! GEJ has not done anything worthy to be celebrated in his six years of ruling Nigeria! Now tell me why we need to talk good of such a man! The 25 people should get the America quip as my brother has tagged it and do the right thing! Don't sell your conscience because of a token.


If these government has performed; the proliferation of bloggers wouldn't have been!"

If indeed, Jonathan made the above statement, what I've just got to say here is that utterances and moves such s the above from him are part of the reasons the oppositions often accuse him of not being 'intelligent enough', because the truth is, there are thousands of key players in the new media industry and every blogger no matter how small, is part of the web of content sharing/syndication which makes the new media the force it has become today.

However, to invite just 25 bloggers and call them 'key social media publishers and editors' in the industry, to me is very ridiculous and further exposes GEJ's much touted ignorance.

You don't even have to give bloggers money. If you do well enough, they'll write well about you.


Thanks to a corruption tolerant government, It's no longer news that this corruption scourge has wrapped it self tight around every sector in Nigerian(the media inclusive), and with what allegedly happened at the meetings with GEJ, obviously those so bloggers are going to take front seat on the trend of social media corruption from this time onward, even if Jonathan does not return to make it a reality as he seemed to have promised them at the meeting.


What some of us will not stop doing is sounding the alarm to media practioners beit conventional or new, that collecting any gratification is unthetical and unprofessional; it will make you spell a thief as a chief.