CHRIS BROWN IS MAD AT NIA AMEY FOR ALLOWING HER BOYFRIEND TO IMPLY HE IS ROYALTY'S DAD..... 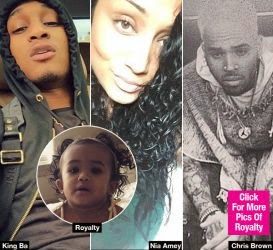 Uh oh. After Nia’s boyfriend King Ba implied he’s Royalty’s dad and that Chris is just a ‘sperm donor’, Chris isn’t projecting his fury onto King Ba, but rather onto his baby mama, Nia! Find out all the EXCLUSIVE details.

Yikes. Chris Brown, 25, is furious at Nia Guzman-Amey, 31, for allowing her boyfriend, King Ba, to play daddy to his 10-month-old daughter, Royalty. Now that King Ba is flooding social media with pics of Royalty, Chris, more than anything, feels “betrayed” by Nia. 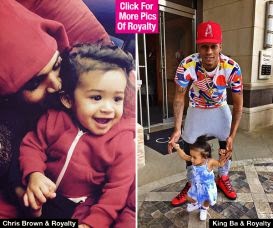 “Chris isn’t mad at [King Ba], he’s mad at Nia. He thinks Nia’sbetraying him for allowing this man to pretend he’s his baby’s father and then have the nerve to gallivant his daughter on social media, and in the same breathblast Chris, her biological father.

King Ba posted a shady pic on April 22 via Instagram, which suggests that he’s the one that takes care of Royalty, while Chris is no more than a sperm donor.

Ouch!Chris has been taking being a father very seriously, so we understand why he would feel threatened by another man in Royalty’s life — and furthermore, to see him flaunt his daughter over social media! However, Chris is 100 percent blaming Nia.