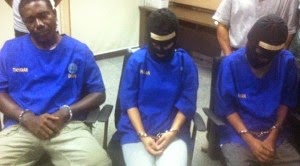 A foreign embassy official on Friday in Jakarta, said on condition of anonymity that Indonesia has concluded arrangements to execute several foreign drug convicts on Saturday, including four Nigerians.The official said some diplomats of the countries of the affected convicts have been requested to travel to Nusakambangan, the prison island off Java where the inmates are to be executed.

A government official also said on condition of anonymity that authorities have ordered preparations for the execution of 10 death-row inmates, including two Australians that have been the subject of a high-profile campaign for clemency.

Tony Spontana, spokesman for the Attorney General’s office, confirmed that a letter, issued on Thursday by a deputy attorney general, told prosecutors to “prepare for and carry out the executions.“It’s not a letter of notification to the convicts”, he said.

He said convicts are typically notified of their executions three days in advance.Spontana said the 10 inmates would all be executed at the same time.He said the other drug inmates facing execution are four from Nigeria, and one each from Indonesia, the Philippines and Brazil.

Spontana said one convict, Martin Aderson, first identified by officials as Ghanaian, was actually from Nigeria.

He also said the Attorney General’s office was awaiting a verdict, due Friday, on a case review request filed by the Indonesian convict, Zainal Abidin.The Australian government has repeatedly asked for clemency on behalf of its nationals Andrew Chan and Myuran Sukumaran.

Peter Morrisey, a lawyer for the Australian pair, said he was concerned by the letters, as he understood the legal process was not yet over.“That looks as if the attorney general’s office is determined to press ahead and hustle through.“That’s the zone we’re in now.

We haven’t got the 72-hour knock but that could be imminent’’, he added.Julian McMahon, another lawyer for the men, said the families of Sukumaran and Chan were travelling to Indonesia, and some members were already there.

Meanwhile, the European Union has criticised Indonesia’s plans to execute the convicts, saying the death penalty was not a solution to the country’s growing drug problem.

A French citizen, Serge Atlaoui, was among the inmates facing the firing squad.

Federica Mogherini, EU Foreign Policy Chief, said the rejections in Indonesia of retrials, including in the case of a French citizen, bring closer the regrettable prospect of further executions.

The governments of the Philippines, France and Brazil have also appealed to Indonesian President Joko Widodo, to show mercy and spare their respective citizens. (dpa/NAN)