Kim Kardashian has now taken a jab at her brother, Rob Kardashian, after he publicly insulted her on Instagram, comparing her to the murderer from ‘Gone Girl.’ 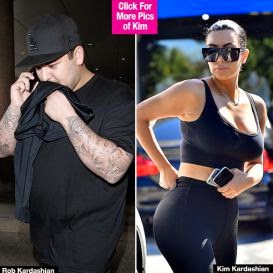 Kim reportedly decided that it was time put Rob in his place with a world class diss of her own.

We hope that Rob Kardashian, 28, is as good at taking insults as he is dishing them out. Kim Kardashian, 34, just totally dissed Rob, following his nasty Instagram insult, according to a new report. See what she said here!

Kim allegedly referred to her estranged brother as just an “extra” on their show, Keeping Up With the Kardashians, according to a report by RadarOnline.com. Ouch! Kim’s quick dismissal of her brother as nothing more than scenery comes after his infamous Instagram post, in which he posted a picture of a bloody Rosamund Pyke and wrote, “This is my sister Kim, the b*tch from Gone Girl.

What Do You Think Of Kim's Insult? Rob deserved it ???