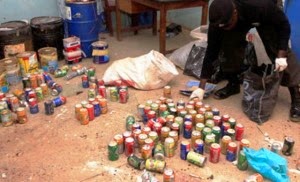 The police have identified the factory that manufactured Improvised Explosive Devices (IEDs) that caused explosion in Enugu State during the March 28 elections, the News Agency of Nigeria (NAN) reports.


The Inspector-General of Police (IGP), Mr Suleiman Abba, disclosed this in Abuja yesterday before a closed-door meeting with senior police officers to strategise on security for the April 11 elections.

Abba said that three suspects have been arrested in connection with the incident.He said, “The investigation into the incident has reached advanced stage; we have identified even the factory where those IEDs were manufactured.

I think that alone is a big success.”Bomb explosion had occurred at the WTC School 1 polling unit in Enugu on the Election Day.

The blast was said to have caused pandemonium as people, including INEC staff and voters ran for safety.Two other bombs also were said to have been detonated by the anti-bomb squad of the state Police command.