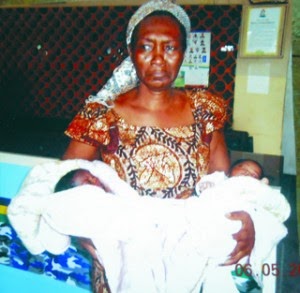 According to P.M.NEWS findings, the suspect who resides at 8, Adeniji Street, Meiran, a suburb of Lagos State, with her husband and step-children, told her husband, Mr. Wasiu Bello, that she was pregnant and that she has been instructed to go and deliver of the baby in Port Harcourt, the Rivers State capital in southern Nigeria.

Mrs. Bello was alleged to have spent two weeks in Port Harcourt before returning to Lagos with twin babies, a boy and a girl, claiming that she gave birth to them.

Curious neighbours who never saw her with pregnancy prior to her trip to Port Harcourt alerted the police at  Alakuko, alleging that they suspected that the woman may have stolen the babies.

Sources said the Divisional Police Officer in charge of Alakuko Police Station, Mr. Musa Alimi, a Chief Superintendent of Police, CSP, instructed some female detectives to investigate the allegation.P.M.NEWS learnt that when Mrs. Bello was confronted by the female detectives, she insisted that she gave birth to the twins and also suggested the police should take her to a medical doctor to confirm her claim.

It was at the hospital that doctors confirmed that she is not the biological mother of the babies.At that point she had to confess that she bought the babies in Port Harcourt for N1.9 million.


When her husband, Mr. Wasiu Bello, was arrested and interrogated, he told the police that his wife told him that she was pregnant and wanted to go and deliver of the baby in Port Harcourt.

He said he obliged only for her to come back with the babies claiming she gave birth to twins.He dissociated himself from the crime.

When P.M.NEWS visited Alakuko Police Station to get the police side of the story, the DPO in charge of the station, CSP Musa Alimi, declined to comment on the arrest, saying he had already transferred the case to Lagos State Criminal Investigation Department, SCID, Smith Street, Panti, Lagos State.

All efforts to speak with the Lagos State Police Comamand image maker, Mr. Ken Nwosu proved abortive as his two mobile lines were switched off.

He also failed to respond to the message sent to his Airtel line at the time of filing in this report.