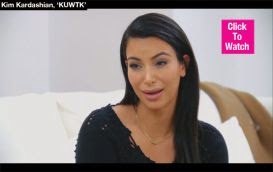 Grab your tissues! An emotional Kim breaks down in a sneak peek of ‘KUWTK: About Bruce’ over Kris’ endless crying about Bruce’s gender transition.

She reveals to Kylie and Kendall that it makes her ‘really sad’ to see Kris so broken down.

Kris Jenner, 59, has showered her ex-husband Bruce Jenner, 65, with tons of support since he publicly revealed he was becoming a woman during his tell-all Diane Sawyer interview.

However, it wasn’t always easy on Kris, and Kim Kardashian, 34, is extra sensitive to her mom’s feelings.

In a sneak peek of KUWTK: About Bruce, Kim cries over the thought of how her mom was initially dealing with Bruce’s transition by crying a lot herself.


In the clip released by E!, which was taped before Bruce’s big gender transition announcement, Kim, Kylie, and Kendall discuss his upcoming interview with Diane.“

Kendall admits that she “feels” that too. Aww.Kim clarifies that talking to Bruce makes her emotional because she can’t help but think about how Kris feels.“

I was thinking, ‘Mom this is really hard for her.’ It’s so sad.


She cries all the time and it makes me really sad,” Kim says between her own tears. “We should really appreciate all the things she does for us, because she does a lot.”
Posted by Chitoo's diary at 21:48:00