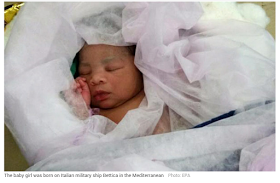 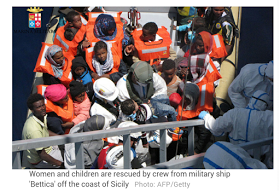 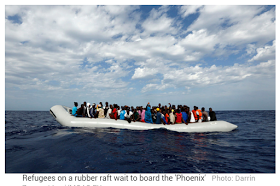 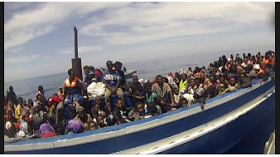 A pregnant Nigerian woman among the 6,500 migrants rescued on the Mediterannean sea delivered a baby on board before rescue came.According to The Telegraph, the baby was born on board an Italian navy ship, the Bettica after her mother, who is Nigerian, was rescued from a boat floating off the coast of Libya on Monday.

The newborn baby and her mother are said to in good health.The Nigerian woman was among the 6770 migrants rescued from four different boats, all of them sent from the coast of Libya by smuggling gangs from Middle East and Africa.“

The mother was brought on board in dramatic circumstances – her labour had already started,” the navy said in a statement.The baby was delivered by Sara Modde, a doctor with the Order of Malta, a Catholic charity that has teams of medics on board many of the search and rescue vessels operating in the Mediterranean.Vincenzo Pascale, the captain of the Italian navy ship on which the baby was born, said: "She is a beautiful baby girl who has touched everyone on board.

The mother started to have contractions as soon as she was brought aboard and gave birth after eight hours."We made a little crib and put it next to the mother, who was worn out by the labour," he told Italian media.

However, not all of them survived the crossing. Seven dead bodies were found aboard two large rubber dinghies packed with migrants, while the corpses of three others, who had apparently jumped or fallen into the sea when they saw rescue vessels approach, were pulled from the water.

It was further reported that the smugglers had packed people into the boats so tightly that they were unable to move their legs and many were suffering from cramp.
Posted by Chitoo's diary at 10:33:00