Woman killed by her houseboy at her home in Enugu. 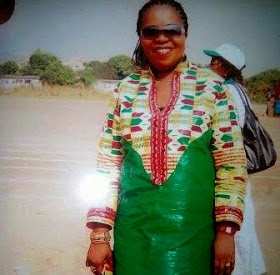 A 59 year old grandmother and teacher from Ogwashi-Uku, Delta state, Mrs Agnes Elue, (pictured) was found dead in her home at One Day road, Awkunana road in Enugu, today May 6th, three days after her houseboy murdered her and kept her body hidden inside the home.

According to a report by The Nation, the houseboy, who is believed to be her close relation, had clubbed her to death during an argument on Sunday May 3rd and absconded from the home.


He later returned to the compound and went to one of their neighbour's flat, a widow, and demanded for N3,000. The widow told him she didn't have that kind of money and the guy reportedly attempted to tear off her clothes and rape her.

They had a scuffle and in the process, the widow was able to draw the attention of other neighbors who came in and held him.

He was thereafter dragged to the flat he lives with his aunty only for them to find her corpse. He confessed to killing her on Sunday May 3rd during an argument. He however refused to speak out on what led to their arguments.