TINUBU SAYS I WANT A WOMAN TO SUCCEED ME . 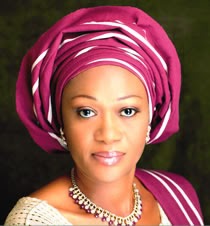 Senator representing Lagos Central Senatorial District, Mrs. Oluremi Tinubu, has expressed a desire for a woman to succeed her.

She also regrets that all the principal office contenders in the incoming National Assembly are men.Tinubu said this at the Press Day event of the Dansol High School, Lagos, on Saturday.

The senator, who is also the wife of a national leader of the All Progressives Congress, Bola Tinubu, said there are eminently qualified women in the National Assembly to occupy principal positions.

She further charged women occupying privileged positions in the society to mentor other women and girls.“

I feel appalled when women beg for appointments. Who says a woman cannot be President? If we had so many women inspiring other women, it would not be that way.

We want to have another Senate President, it will be a man. The Speaker will be a man. Isn’t that a shame? Where are the women?“Don’t ask me, ‘What about you?’ My situation is different.

My husband said, ‘you will not be used to blackmail me’. And I accepted,” she said.The former Lagos State first lady also admitted that her surname is controversial but insisted that her family was not extremely rich.

“The Tinubu name is a controversial name but we are not as wealthy as people think. Everything we have we expended on the struggle. You say 16 years of struggle, but it has been 21 years for us,” she said.

The senator also decried the disappearance of the middle-class, urging the President-elect, Muhammadu Buhari to fix the economy to ensure a re-emergence of the middle–class again.


“I came from the middle-class of old and I attended public schools. I am from a very humble background by the way but I learnt to see and appreciate beauty. But today it is only the rich that can afford beautiful things.

We do not have a middle-class anymore. It is either you are rich or you are poor. The new administration needs to create the middle-class which is a buffer for the poor and the rich.


“We have a good leader now who is credible. A former British Prime Minister, Tony Blair, came here and said the world is proud of Nigeria,” she added.