Pastor calls for jail term for women who call God's name during sex.

Pastor calls for jail term for women who call God's name during sex. 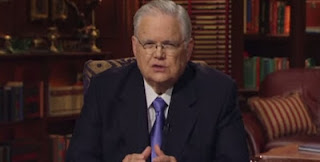 Dr. John Hagee, the founder and senior pastor of the Cornerstone Church in San Antonio, Texas, not only agrees with what the Bible says, but also takes the faith to a higher level.

One of the things that the Bible has consistently denounced is the taking of the Lord’s name in vain. Speaking exclusively with Newslo, Hagee stated that ;in this world of crimes and deaths that
surround us, a simple blasphemy does not get that much attention when it should.”


"Saying the Lord’s name in vain might seem petite and insignificant compared to some of the things that are going on in the world right now, even in churches all across America. But, that’s precisely the problem. If the shepherds of a faith start doing wrong, what is the flock supposed to do? Follow in their footsteps? I don’t think so. The flock needs to get its bearings and start thinking for itself.
But, nowadays you have people committing sin everywhere you look, including Houses of God, which are the holiest of places.”

Asked how the situation could be corrected, Hagee replied:
“Well, we’d have to start with ourselves, as with everything in life. If you’re asking about my personal opinion, there is no greater sin in terms of wrongly using God’s name than women who use it during sex.

That is one of the filthiest, most derogatory and sinful uses of the Lord’s name I can think of. If it were up to me, I would put every single woman or girl who does that in jail. That would be a fine example of God’s wrath aimed at what is, in my opinion, a terrible misuse of our Maker’s good name''.