President Buhari's wife relocates to Aso Rock ahead of husband.

President Buhari's wife relocates to Aso Rock ahead of husband. 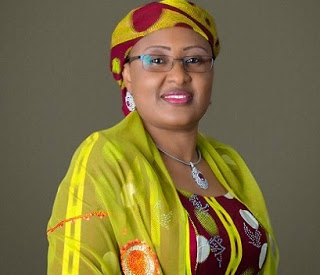 It was gathered that Mrs. Buhari formally relocated to the Presidential Villa on Thursday at a time when her husband was out of Abuja.
“Hajia (Buhari) arrived here (Presidential Villa) with her entourage at about 6pm on Thursday. She had relocated ahead of her husband. She passed the night here,” a Presidency official reported.
Another Presidency official said that the President is expected to join his wife  next week.

Buhari had departed Abuja for Kaduna on Tuesday shortly after he arrived from South Africa where he took part in the just-concluded 25th Assembly of Heads of State and Government of the African Union.
He proceeded from Kaduna to his hometown, Daura, in Katsina State.
Buhari is expected back in Abuja from the journey described as “private trips” this weekend.

“The President is expected back this weekend. He will be expected to join his wife here on his arrival,” the source added.
Upon his formal relocation to the Presidential Villa, Buhari is expected to operate for the first time from his office on Monday.

The Senior Special Assistant to the President on Media and Publicity, Mallam Garba Shehu, said  that ongoing renovation work was hindering Buhari from moving into the Presidential Villa.

He said,
“As far as the President is concerned, the place (his official residence) is not ready yet. Workers are cleaning and refurbishing the place. Once the exercise is completed, the President will move in.”