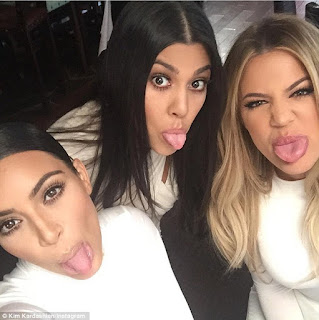 After Scott Disick betrayed Kourtney Kardashian (by reuniting with his rumored ex), Kim and Khloe have rallied around their big sis to send one very clear — and super sassy — message to Lord Disick.

Note to Scott Disick, 32 — when you mess with one Kardashian sister, you have to deal with all three of them. In the wake of Kourtney, 36, dumping her boyfriend after nine years of togetherness, Kim, 34, and Khloe, 31, have come to her side to relay the following sentiment to Scott: “IDFWU!!!!!” Yeah, you all know that that stands for. Read on for all the details!

The best way to get over a breakupChloe Bartoli, 25, while vacationing in Monaco.

Starting the morning off with a sisters-only workout sesh followed by lunch at LA’s Casa Escobar on July 7, Kourtney, Kim and Khloe continued to hang out for the rest of the day — obviously documenting their epic get-together on social media.

Khloe posted a pic of all three sibs (looking fly as ever in all white attire) making funny faces, accompanied by the cheeky caption, “IDFWU!!!!!” As in Big Sean‘s famous tagline, “I don’t f**k with you” — an incredibly distinct diss to Scott. Kim regrammed the photo with slightly different wording, still expertly utilizing another applicable song acronym.

Should Scott be worried after the Kardashians' disses?Yes!Nah.VoteView Results

This time, “#BBHMM,” referring to Rihanna’s current hit “Bitch Better Have My Money” — another apparent warning to Kourt’s ex. We all saw what happened to the dude in that video! Basically, Scott better be watching his back