Man who abandoned his wife & twin babies say, wife reassures him of her love for him- "I Fear I Will Be Arrested" 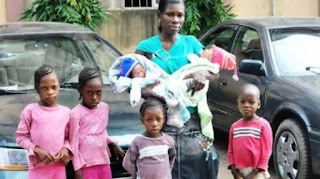 Citizen Emeka Uche, the man who abandoned his wife Ruth and their three set of triplets says he is afraid to come out of hiding as he fears he may be arrested. According to him, frustration made him run away from his family after his wife informed him she was having another set of twins Speaking with The Nation, he said;
"I love my children,  I miss my wife too, but I am afraid to come back. People won’t understand how frustrating life has been. I am scared I would be arrested if I come out. How do I watch my kids suffer? I could not tolerate it. I did not even have money to assist my family. I watched them suffer daily, without knowing what to do.

There were nights I watched my children sleep without food. Some days I will buy N100 garri and akara (bean cake) for my family. Because of my low income, I was always in debt before the end of each month. I am a factory worker and I earn N33,000 after tax and union fees.

Then I have four children and a wife to take care of, which has been very difficult,  I could not stand having a new set of twins that will come to this world to suffer. Initially, I thought it would be a child, probably a boy so that I would have two sons and three girls, but when I learnt it was twins again,  the only thing that came to my mind was to run away.

It was not an easy decision and I have not been happy knowing that I abandoned them. My wife is a very good woman and I love her. I love my children too. I became frustrated when I called my brothers for assistance and they did not even answer me.

I just dressed up that morning, I knew I won’t come back but I didn’t tell her so that she would not feel bad. I am pained that I have not seen my wife and children for three months, sister you won’t understand my situation, but know that it has not been easy for me,” he lamented on telephone, as he refused to disclose his location.

”he said
His wife who was with the reporter while the telephone interview was being conducted reassured him of her love for him and that no one will arrest him saying anyone who arrests him will kill her first
"Please do not hang up the phone on me my heart. Just listen to what I have to say.

I understand that things have not been easy but you should know that we have suffered alot. Please come back to me and your children. No one will arrest you because you are still my husband and I still love you. Anyone who arrests you will kill me first. Please talk to this aunt and also come so that we can go to Alausa together.

They are all good people and mean well for us,”she said
Mrs Uche who received N200, 000 cash gift from Thisday Newspaper was at the bank to open an account and she looked at her three months old twin babies whose birth has brought her fortune and said
"You are a blessing to my family.

What would have happened if I had aborted you? I would have just continued suffering with your brother and sisters and father”.she said