Michigan judge detains children for refusing lunch with their father 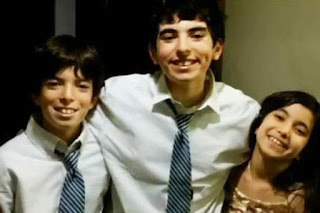 A Michigan judge ordered three children 15, 10 and 9 years old be sent to a juvenile detention facility until they were 18-years-old after the trio refused to go to lunch with their father.

Judge Lisa Gorcyca told the mother and children that the case, stemming from a contentious divorce that began in 2009, was tied for the worst "parental alienation" case she had ever seen. She blamed the mother for alienating the two older boys and their younger sister from their father.

"Your children, you need to do a research program on Charlie Manson and the cult that he has," the judge told the mother, according to court transcripts.

During the hearing, the son attempted to explain to Gorcyca why he didn’t want to spend time with his dad. “Because he is violent and I saw him hit my mom,” the boy said in court documents.

Gorcyca claimed the child had been brainwashed and held all three in contempt of court and sent them to the Children's Village, a detention facility, where they were to be held until they turn 18-years-old.

“I felt like I was watching them being executed,” the children’s mother said. “No matter how bad the divorce gets, I think the court should not punish the kids for that.”

The children remained in custody Thursday, according to the office of attorney Lisa Stern, who is representing the mother.
“I have been doing family law for 20 years and I must say this shocks the conscience,” Stern said. “I think we have a court with the best interest of children in mind. I think the judge was very concerned about the reunification of this family, but went about it the wrong way.”
The father's lawyer, Keri Middleditch, said the situation was traumatic for everyone involved.
"It is unfortunate that the children are in shelter care due to the actions of their mother," she said in a statement on Thursday.
Middleditch said the mother "has continued to endorse the children's behavior that she successfully instilled in them, effectively alienating them from their father. The court took severe action to attempt to remedy a heart-wrenching situation, solely created" by the mother.

On Thursday, a lawyer in the judge's office, Amanda Murley, said Gorcyca was "unable to comment" because of the ongoing case.