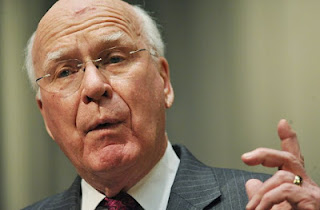 While in the US, president Buhari criticized the Leahy Law - a U.S. human rights law that prohibits the U.S. Department of State and Department of Defense from providing military assistance to foreign military units that violate human rights.

Reacting, the sponsor of the Law, US Senator Patrick Leahy (the law is named after him) said Buhari is misguided in his criticism as the law, which has so far stopped the US govt from assisting Nigeria in the war against Boko Haram, can't be blamed for the atrocities committed by the 'murderers and rapists in the Nigerian military'.

“It is well-documented by the State Department and by respected human rights organisations that Nigerian army personnel have, for many years, engaged in a pattern and practice of gross violations of human rights against the Nigerian people and others, including summary executions of prisoners, indiscriminate attacks against civilians, torture, forced disappearances and rape.

Rarely have the perpetrators been prosecuted or punished. This abusive conduct not only violates the laws of war, it creates fear and loathing among the Nigerian people whose support is necessary to defeat a terrorist group like Boko HaramPresident Buhari ignores the undisputed fact that most Nigerian army units have been approved, under the Leahy Law, for U.S. training and equipment.

Only those particular units against which there is credible evidence of the most heinous crimes are ineligible for U.S. aid. And even those units can again become eligible if the Nigerian Government takes effective steps to bring the responsible individuals to justice. I strongly agree with President Buhari about the need to defeat Boko Haram, and I have supported tens of millions of dollars in U.S. aid to Nigeria for that purpose.