Obasanjo talks about 'Why I allowed Abacha arrest me ' 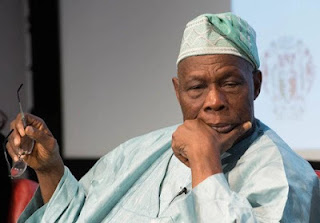 Former President Obasanjo has disclosed reasons why he allowed former head of state, Sani Abacha to arrest him in March 1995 for allegedly conspiring abroad against the Abacha regime, despite many opportunities to escape and accept an offer of political asylum by the US.

Leadership  reports
Obasanjo was among the opposition lights that were against the regime of the late Head of State, General Sani Abacha, who ordered their arrest, trials and sentences but spared their lives due to international pressure. Abacha was the most senior military officer in the illegal contraption called Interim National Government led by Chief Ernest Shonekan after the military president, General Ibrahim Babangida, was forced to resign over the historic annulment of the June 12 June, 1993 election won by Moshood Abiola, who later died in the military gulag.

In his newest controversial memoir, ‘My Watch’, he narrated his opposition to the Abacha regime which led him to the formation of National Unity Organisation which he intended to use to force Abacha to quit power.

According to his narrative, Obasanjo had been meeting with some leading politicians and non-politicians in every part of the country on the need to free the country from the jackboot of Abacha whom he said, “was so much below average as an officer that no serious attention was paid to him until he was made to announce the coup.

“I was not in doubt that Abacha would attempt to silence me. This was clear from his apparent ambition for life presidency of Nigeria in insatiable appetite for corruption; his looting directly from the Central Bank; his need to silence everyone that could oppose him in any form; his actions towards my close friends and associates and his close surveillance of me by his security both within and outside Nigeria.”

Obasanjo recalled how during his visit to Kenya for the funeral of the father of the opposition leader, Raila Odinga, where the Nigerian Embassy officials wrote a report indicting him, stating that “since Odinga was in opposition to the government of Kenya when he died, I had gone to Kenya to create problems for the Kenyan government by supporting the opposition, and the Nigerian government should restrain me from causing great problems between Nigeria and Kenya.”

Narrating further, Obasanjo said,
“Rumours about Abacha taking action against me started to spread and ring louder and louder. I had no fear because I had done nothing to cause me fear or anxiety. I was about my life and my business unperturbed.”
Source: Leadership.
Posted by Chitoo's diary at 12:41:00