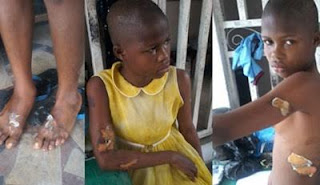 A Warri based couple, Mr and Mrs Francis Onyeji have been arrested by men of the Ekpan police station in Delta state for defiling and assaulting 13 year old girl pictured above.

According to ThisDay,  the 13 year old JSS 2 girl was constantly subjected to sexual abuse by Mr Onyeji. When the wife, Chibuzor, who is the little girl's aunt found out, she battered the girl, accusing her she was lying against her husband.

Mr Onyeji, an offshore worker with an engineering company based in Delta state, constantly gave the girl money after sleeping with her and begged her not to tell her Aunt. Recently, the girl took the money he gave her to school where it was was stolen. She raised an alarm and accused her fellow classmates of stealing her N1,500. To ensure that she was actually telling the truth, the school delegated a teacher to follow her home to see her guardians. On getting home, she was interrogated by her aunt and she confessed that Mr Onyeji gave her the money after sleeping with her.

"When my aunt asked me where I got the money from, and l told her it was her husband who gave me the money after sleeping with me, she said it is a was a lie".

Mrs Onyeji was angry with her, saying she was telling lies against her husband. After the teacher left, the woman descended on the girl. She used hot knife to inflict injuries on the girls buttocks, back, leg and hand.

Mrs Onyeji was arrested and charged before an Ekpan magistrate court on Monday July 6th for physical abuse on the minor. She was however granted bail on compassionate ground as she is a nursing mother of  three months old baby.

Mr Onyeji is currently on the run . The state police have launched a manhunt.

Mrs Onyeji is still in police custody after youths in the area threatened they will do to her what she did to the little girl if she returned home. The little girl is currently in the custody of the Delta state Ministry of Women Affairs and Social Welfare and the Nigerian Child Welfare Fund (a non-governmental organisation and will be reunited to her biological parents after the case has been concluded.

The case comes up again on July 21st.