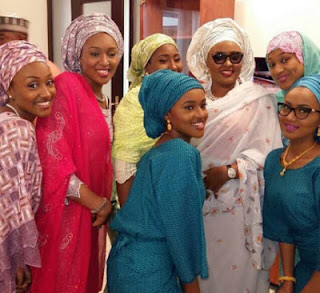 That is what Leadership newspaper is claiming. According to the report, the Nigerian embassy in Saudi Arabia this week side-stepped protocol by giving preference to former Vice President Namadi Sambo and his entourage of 15 family members over that of President Buhari when both arrived for the lesser Hajj (Umrah) in Saudi Arabia.

The Umrah is performed by Muslims from all over the world who converge on the holy city of Mecca to observe the ritual, which can be undertaken at any time of the year but mostly observed during Ramadan.
The pilgrims perform a series of worship activities symbolising the lives of Prophet Ibrahim (AS) and his second wife, Hajara.

Leadership gathered that both families arrived in Saudi Arabia this week for Umrah and while Aisha Buhari and her five children were allotted two-bedroom accommodation, the former vice president was allotted an eight-room apartment.

An embassy source revealed that Buhari’s wife had travelled to Saudi Arabia via Emirate Airline instead of the presidential jet, as was the practice in the previous administrations, and had decided to seek alternative accommodation by herself at her own expense, to accommodate her and her children.
However, it was gathered that the government of the Kingdom of Saudi Arabia provided an official vehicle to convey the Nigerian president’s family around as it is done for the families of all visiting heads of state.

The source further revealed that the consular-general, Ahmed Umar, still sees himself as being more beholden to the former vice president than anyone else because Sambo it was that was instrumental to his elevation and posting to Saudi Arabia. He still sees himself basically as Sambo’s protege, a staff member of the embassy told Leadership.

The source added that even the two-bedroom apartment allotted to the president’s family was a result of the efforts of the ambassador, Alhaji Abubakar Bunu, and not the consular-general.
While the Peoples Democratic Party (PDP) was in power, Buhari and his family were denied any privileges by the Nigerian embassy in Saudi Arabia, even those due to a former head of state because he was in the opposition.

Sambo and his family had last year embarked on a widely publicized Umrah.