Sickle cell patient raped by stepfather forced to live on the street with her mother and brother. 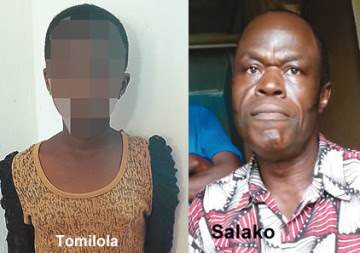 A 14-year-old girl, her 10 year old brother, and their 42-year-old mother have all been living in a makeshift kiosk that has seen better days in Shagari Estate in Iyana Ipaja - Ipaja, Lagos . The trio started living in the kiosk after the Mum caught her Husband allegedly raping her. Names of the children and mother will not be disclosed so as to protect their identity. (Tomilola isn't the girl's real name)
The teenager was raped by her stepfather, 60-year-old Joseph Salako and were sent packing after her mom confronted him and raised the alarm.

When Punch correspondent and the Executive Director, Esther Child Rights Foundation, Mrs. Esther Ogwu, visited the woman and her children at the kiosk during the week they were in a very pitiable state.
Their Mum said in July 2015, she caught her husband, Tomilola's stepfather, moments after raping the teenager and raised the alarm. She said reported the matter at the Gowon Estate police station and Salako was subsequently arrested by the Police but was released the following day because he promised to pay N50,000 for 'damages', a deal she was forced to accept because of the threats by Salako's other older children and the need to raise money to take care of her sick children.
The Mum said she met Salako 9 years ago after she lost her 1st Husband in a motor accident. She added that her daughter and son were suffering from sickle cell disease. She said she has an 8 year daughter with Salako who still lives with him.
The teenage girl said her stepfather had the habit of sleeping with her at any slight opportunity and threatened to kill her if she told anyome about it.
She narrated:

"My mum had told me to always go and greet him anytime I got home. So, when I came back from school, I went to greet him. I was about leaving when he called me and said he wanted to tell me something that I must not tell anyone.

"He said he wanted to sleep with me. I refused but before I could run away, he carried me and took me inside. He tore my panties and 'did it'. I was crying because it was paining me but he didn't stop. I tried to shout but he covered my mouth. When he finished, he cleaned my legs and his 'thing' and warned me that he would kill me if I told anyone."

She continued, "That was not the only time he did it. At other times, he would call me and tell me to 'suck' him and because I usually refused, he would slap me. Sometimes, in the midnight, he would come down from the bed and 'do it' with me. If I tried to shout, he would cover my mouth and ask if I was ready to die. I would have to endure the pain and just keep quiet.

"The day my mum saw us was the fifth time. When my mum came in, he was already doing it but when he saw the ray of light from the torch my mum was holding, he quickly stood up and went to block her. He would always promise to buy me anything I needed. We had to leave because of the incident.".

She said one of Salako's daughters took her to the State High Court premises at Ikeja and made her swear an affidavit that she would not press charges.

"They took advantage of the fact that I am not literate," she said.

She explained that she used to have a shop in front of her (new) husband's house where she had a dry-cleaning job.
On the day of the incident, she said her little boy was asleep in the shop and because of the cold, she sent her daughter to go into their room upstairs to bring a blanket to cover the little boy, who was sick. She said she became unsettled when the girl did not return on time.

She continued, "I was waiting for her to return with the cloth so I could cover her brother, but when I didn't see her, I took my torch and went upstairs to see why it was taking her too long. When I entered the sitting room, the other children had slept and everywhere was quiet.

"So, I went towards the room and suddenly, my husband came out of the room naked and blocked the entrance with his hands. I asked him why he was blocking me but instead of answering me, he asked what I was looking for. So, I passed under his hand to see what was happening. To my greatest surprise, I found my daughter also naked on the floor. I saw my daughter's panties close to the entrance. When I asked her what happened, she was about explaining when he slapped her and told her to keep quiet. I couldn't hold it to myself, so I screamed and started shouting.

"His other children then came out and told me not to make noise about it so I wouldn't disgrace their father, but I couldn't keep it to myself. I slept in the shop with the two of them that night." After series of threats from Salako's children, some neighbours who later learnt about the incident, advised her to make a formal report at the police station two weeks later.

"I went to report at the Gowon Estate Police Division. Because of the way the man always pestered me for sex, I used to pray that God should help me so he could reduce his demands. So when he stopped asking, I thought my prayer had been answered not knowing that he had transferred his urge to my daughter.

"I didn't know he could do that to my child even when he is not the father. This is the man I was married to for nine years. These days, anytime I come across him or his children, they keep threatening me."

Stuck in frustration and utter depression, Felicia has been taking care of her children with the little money she gets when she helps people to wash their clothes, which she does occasionally.

"I'm willing to work but there is none," she said. Tomilola has also been helping in sustaining the family with the little she earns from a canteen where she washes plates.

The Mum said Salako had been persuading her to come back home but she hasn't relented in her resolve not to go back to him.
She said her 2 children are very sick and are in obvious need of urgent help and have not been able to go to school because of their situation.

While they continue to live in the unsafe kiosk, which is open to the severe weather conditions that SS patients should not be exposed to, Salako has remained a free man.
When Punch correspondent and Ogwu visited Salako's house around Akinogun Bus Stop in Shagari Estate, a short distance from where Felicia now lives, he explained that Felicia moved out of the house for no reason known to him, saying he had been calling her to come back home. When asked about his arrest by the police, he admitted that he was arrested but refused to disclose the reason.

"As I'm speaking to you, I don't know where she is. I didn't do anything to her daughter. The money I'm paying to the police is the money she asked from me sometime ago. I've paid her N25,000 already," he said.

Ogwu contacted the police to revisit the case and prosecute the suspect accordingly. She said:

"Rape is a crime, regardless of what the complainant says. That woman was helpless and she must have taken that decision under pressure, because she doesn't have anybody to help her. We want people to help her because she really needs help, more so for the sake of her children."

The Divisional Police Officer, Gowon Estate Police Station, CSP Festus Otabor, explained that the police had yet to find sufficient evidence to prosecute the suspect, adding that the woman had sworn to an affidavit not to press charges against her husband since there was no enough evidence to validate the allegation.

"When they came here, the woman was crying and begging us not to take him to court. So, now if she wants us to do that, she should come to us and we will look into it, but the test result didn't produce sufficient evidence," he added.