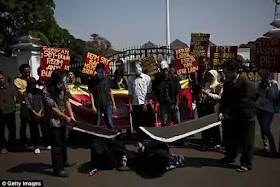 A married 45-year-old Sri-Lankan woman who has worked in Saudi Arabia as a maid since 2013 has been sentenced to death by stoning for committing adultery with a fellow Sri-Lankan migrant, the man meanwhile gets just 100 lashes because he was single at the time. Sri Lanka is calling for a pardon.

Upul Deshapriya, spokesman for the country's Foreign Employment Bureau, told the Thomson Reuters Foundation that the bureau has hired lawyers to file an appeal in the shocking case. 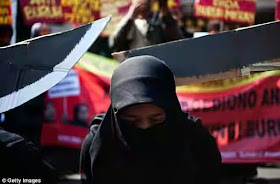 'She has accepted the crime four times in the courts,' Deshapriya said. 'But the Foreign Employment Bureau has hired lawyers and have appealed against the case.

'The appeal is going on. Also from the foreign ministry side, they are in negotiation with the Saudi government on a diplomatic level.' 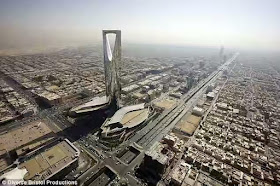 Ironically, Saudi Arabia is the current chair of the United Nations Human Rights Council Panel, the nation which follows sharia or Islamic law has executed over150 people this year mostly by public beheading.
Posted by Chitoo's diary at 10:23:00