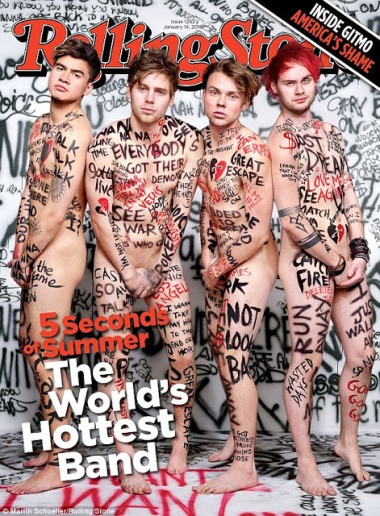 Boy Band, 5 Seconds Of Summer, posed naked on the cover of the iconic publication of Rolling Stone. Members Luke Hemmings, Michael Clifford, Calum Hood and Ashton Irwin were in the nude while covering up their private areas with their hands.

The band had written messages all over themselves in black and red paint as they stood in front of a white background with plenty of the same graffiti-like type. Lead singer and guitarist Luke discussed their relationships with fans and how they would go to bars to mingle with some of them, which has lead to plenty of intimate moments.

The 19-year-old singer said: 'When you put four young dudes on a tour bus, playing theaters, then arenas, you're going to have sex with a lot of girls, I guess.'
Posted by Chitoo's diary at 15:37:00