Identical Twins Who Were Sleeping With The Same Woman: Meet The Twins (PHOTO) 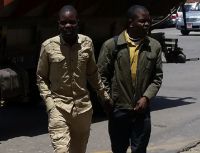 A BULAWAYO woman who last week dragged the wrong twin brother to the maintenance court came face to face with the identical twins on Monday, adding to her confusion on who was the father of her son.

A week after Tendai Zimunye, one of the twins, told Shylet Dungeni that he was not the father of her child, the woman was surprised to see an identical man in court claiming to be her ex-lover.

Tendai came to court saying he had been served with a summons instead of his twin brother Trust.

When she fell in love, Dungeni had not known that the man she was in a relationship with had a twin brother.

Dungeni applied for $190 from Trust Zimunye whose real name turned out to be Tonderai Zimunye but Tendai was served with the summons hence he appeared in court last week.

When Tendai told magistrate Adelaide Mbeure that Dungeni”s ex- lover was his twin brother Trust not him, she ordered both men to come to court.

On Monday the the identical twin brothers who are both soldiers, came for the hearing.

“I am shocked to see them together because I thought he lied about being a twin the last time he was in court. My ex-lover told me that his name was Trust. I cannot believe I was deceived,” she said.

Dungeni’s ex-lover produced his national identity card that confirmed that his name is Tonderai and not Trust.

He told the court that he had two other maintenance cases and was paying $300 per month hence he could not afford to offer child support to Dungeni.

“I am paying $200 maintenance to my wife for our child and the $100 deduction in my salary is towards the upkeep of my daughter with an ex-girlfriend. I am surviving on borrowing because I have a lot of debts. I can only offer $50,” he said.

“My brother helps take care of my parents because after all these deductions I’m left with $5 to take home,” he said.