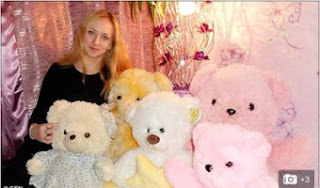 This is why we should be careful who we date. What an evil woman!

A Russian beauty queen contestant strangled the 10-year-old daughter of her ex lover with a pair of tights in revenge for being dumped.
Ekaterina Poberezhnaya, 23, was found guilty of murdering the girl, called Nastya, in the small village of Lazo, in the Primorsky Krai region of south east Russia.
She was later sentenced to 12 years in prison for the shocking crime.
A court heard how Poberezhnaya was heartbroken after her lover decided to end their relationship in order to patch things up with his family.
Succumbed by rage the scorned woman, who was an entrant in the 2012 beauty pageant ‘Miss Dalnerechensk’, seized her moment when the girl came round to her apartment.

Once the little girl was in her home she strangled her with a pair of tights the youngster had brought with her.
Poberezhnaya plead not guilty to charges and even appealed for her lengthy sentence to be reduced.
However, the court dismissed her appeal and she now faces 12 hard years in a Russian jail.
Children are revered in Russian culture and anyone who abuses them automatically becomes marked by other convicts inside as the lowest of the low.
Penal experts believe it is likely that Poberezhnaya will have to serve most or all of her incarceration in solitary confinement for her own safety.