Indian teenager dies after being raped and set on fire 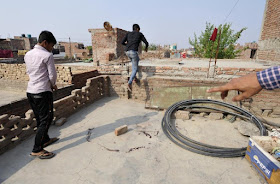 A 16-year-old Indian girl who was raped and then set on fire on the roof of her home on Monday has died, police said on Wednesday, the latest in a string of horrific sexual crimes committed against women in India.

The investigating officer told AFP that the  teenager had sustained more than 90 percent burns on her body and could not be saved. He said she died in hospital early Wednesday.

"Unfortunately she could not be saved despite the best efforts of the medical staff," said Ashwani Kumar. "We have arrested the accused, who is 19 years old and sent him to judicial custody. "An investigation is on to find out more about the motive and details of the crime,".

"The body has been sent for postmortem. We are waiting for the report."he said.

The accused has been charged with a slew of offences including rape and murder, Kumar said.
According to media reports, the girl's dad said the 19 year old man lived nearby in their village in the northern state of Uttar Pradesh had been harassing his daughter for a year despite the fact that he had warned him several times to leave his daughter alone.

The 19 year old has been arrested and charged with sexual harassment, rape and murder.

There have been so many rape incidents in India with the men getting arrested sometimes while others have shamed the victims and let the men go unpunished.
Last month, a teenage rape victim was sexually assaulted for a second time while in hospital receiving treatment for the initial attack in eastern Jharkhand state.
Posted by Chitoo's diary at 10:01:00