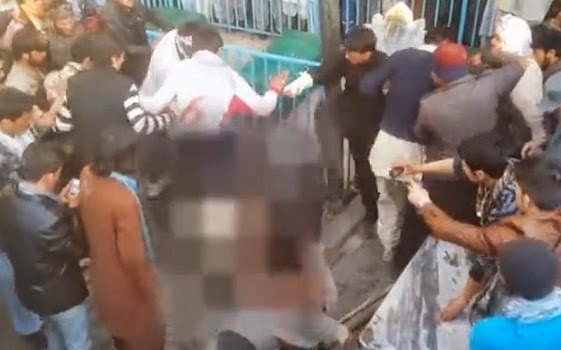 A mob in Afghanistan, punched, kicked, stoned, and beat a woman to death and then set her body on fire and threw it into a muddy river in Kabul yesterday Thursday March 19th for burning pages of Islam's holy book near the Shah-e Doh Shamshira shrine and mosque and it was all caught on tape.

The woman was later identified as 27 year old Farkhunda. Her parents later told police that she suffered from mental illness for many years and that she had not meant to burn Islam's holy book


The head of Kabul's criminal police General Farid Afzali told AFP: "A woman burned a copy of the Koran in the Shahi Doshamshira neighbourhood. She was killed. The woman's body was then thrown into the Kabul Rive"

A spokesman for the Ministry of Interior later confirmed that four suspects have so far been arrested in connection with the killing.