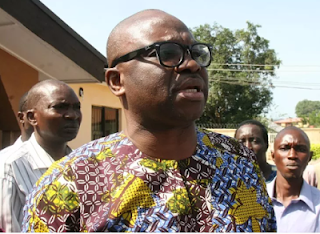 Police in Ekiti State has arrested the Iyaloja of Ado Ekiti, Chief Mrs Waye Osho for allegedly collecting a sum of N93,860,000 from market men and women in the State. The embattled Iyaloja illegally allocated 4,940 spaces to build shops at Awedele market, Ado Ekiti.

Mrs Osho allocated 4,940 space so far at the rate of N19,000 per slot, totaling N93,860,000. The government had directed traders in Oja Oba market in Ado Ekiti to relocate to Awedele area of the State capital so as to enable the government to rebuild the market.
The Iyaloja capitalised on the desperation of the traders to Bill them N19,000 per shop space and the 4,940 traders that paid had started building shops on the land without recourse to the government.

Government had directed her to refund the money already collected, totaling N93.4m, but she refused. The police is already in possession of video clips of the victims complaints and other relevant evidences.