Tied to a bed, injected with morphine to stay 'silent' and beaten so badly she couldn't walk for two months: Two Yazidi sex slaves relive the unspeakable cruelty they suffered at hands of ISIS thugs 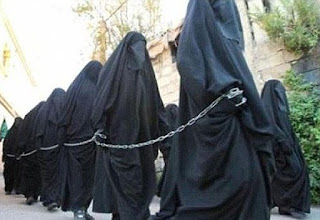 EXCLUSIVE: From the relative safety of the Khanke refugee camp in Iraq - overflowing with refugees made homeless by ISIS - two Yazidi women told MailOnline of their harrowing ordeals at the hands of their ISIS captors. A 19-year-old mother, whose name has been changed to Reehan (right), eventually 'submitted' to her depraved jailer when he beat her one-year-old son. 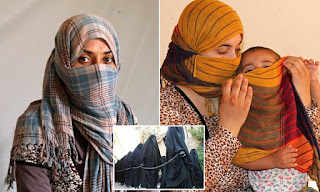 Her voice trembled under the weight of her sadness as she recalled another ISIS fighter raping a mother and daughter in the house where she was kept prisoner. Another girl named Barfo (left), which is also a pseudonym, was tied to a bed, drugged with morphine to make her 'stay silent' and beaten so badly she could not walk for two months.

ISIS has kidnapped hundreds of Yazidi girls since launching raids on northern Iraq last August, and the United Nations believes the 'prettiest' ones are sent to depraved auctions where they are stripped naked and sold as sex slaves.

ISIS has carried out the 'systematic sexual crimes' against girls from the Yazidi community since kidnapping over 200 of them from their homes in northern Iraq last August.

Those considered the 'most beautiful' are then sent to horrendous auction houses where they are stripped naked and sold to the highest bidder. 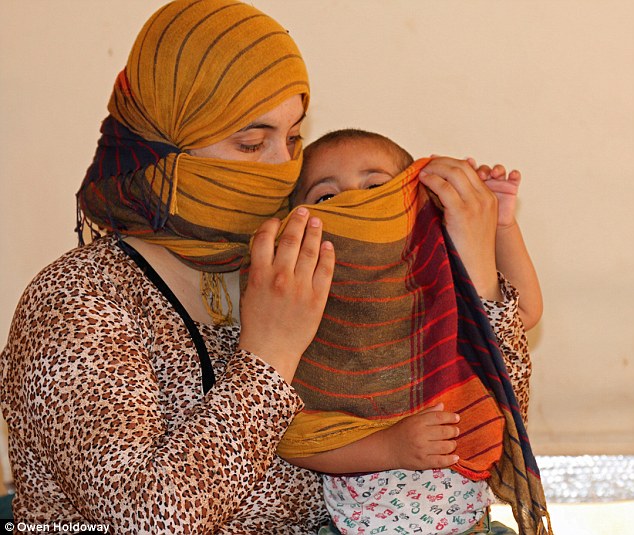 It was the same for a young mother - known simply as Reehan to protect her identity - who told MailOnline how she was abducted from her home in a village north of Sinjar last August.

'I was with my husband and my son when 30 cars with [ISIS] men drove over near our home,' said the woman with olive skin and long dark hair as she held her baby boy in her arms.

The Sunni extremists rounded them up and drove them to the town of Tal Afar - around 50 miles away - where the women and children were separated from the men.

Here, Reehan was auctioned off to a 50-year-old Iraqi Turkmen fighter inside a school where she was put on display with around 200 other Yazidi women. She does not know how much the fanatic paid for her slavery.

Her voice trembled with fear as she recounted how the 'very cruel' man took her to his home - where she would be locked up for the next 10 months.

At first, she tried to prevent him raping her but when the Turkmen beat her one-year-old son in front of her, she was forced to stop resisting.

'I agreed to everything that this man wanted for the sake of my son,' she said clutching her adorable infant child a little bit tighter.

And when she questioned his beliefs, he screamed at her and said that the sexual trade in Yazidi women is permitted 'according to Islam'. 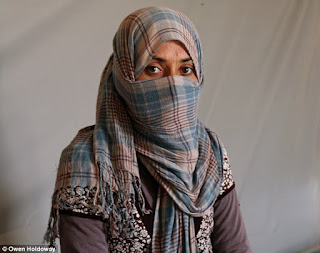 Harrowing: Reehan let her first captor, a 50-year-old Iraqi fighter, rape her 'whenever he wanted' for fear of what he may do to her son (pictured) if she did not comply.

Sickening: Reehan, who now lives in the Khanke refugee camp in Iraq, says she was auctioned off to a 50-year-old Iraqi fighter after being put on display with around 200 other Yazidi women in Tal Afar.

Slavery: The United Nations has said the 'prettiest' Yazidi girls captured by ISIS (file photo) are sent to twisted auctions where they are stripped naked and sold to the highest bidder

Those considered the 'most beautiful' are then sent to horrendous auction houses where they are stripped naked and sold to the highest bidder. 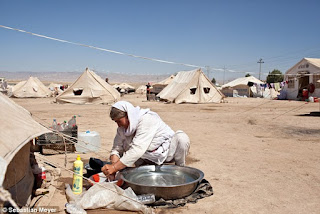 After 10 months of constant abuse and cruelty, she became despondent and numb and let him rape her 'whenever he wanted'. But she refused to commit suicide because she feared what would happen to her child.

She was later moved to the house of another ISIS fighter in Mosul, Iraq, before being sold for a third time to a Libyan man in the Islamic State's adopted capital of Raqqa, Syria.

She lived there for around 20 days, in a house with two other Yazidi girls, one aged 22, the other only 15, before an elderly mother and her five-year-old daughter moved in too.

It was here that she saw something so sickening, it convinced her that she had to risk it all and try to flee.

I want to leave Iraq. But, I have nothing, no husband. I have no hope in this country'Reehan', former ISIS captive

He came into the home and pointed at the mother and her daughter, she recalled.

He then brought them into a room and raped the mother before molesting the daughter.

She finally decided to escape by stealing a hijab and fleeing to a Syrian man's house - where she telephoned her elderly mother in Dohuk.

After spending a few nights hidden there, the Syrian agreed to help her and her son cross the border but only if she paid him $15,000 - just under £10,000.

Reehan said her mother desperately got the money together with the possible help of a charity, adding: 'After two days in Raqqa, the [Syrian] man drove us to Fish-Khabur on the Iraqi-Syrian border where I met my mother... I cried.'

She then travelled to Dohuk, where she now lives with her mother and son in the Khanke refugee camp. ISIS is still holding her husband, her father and two sisters captive. She is not hopeful that any of them are still alive.

'I want to leave Iraq. But, I have nothing, no husband. I have no hope in [this country],' she said.

You do not have to go far in the overflowing and primitive refugee camp - home to tens of thousands of other homeless Yazidis - to find other harrowing experiences.

Living near 19-year-old Reehan and her son is another Yazidi woman .